Who is Jesus? Chapter 27 "Jesus Walks on the Water" 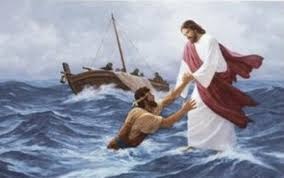 Jesus had been teaching for many hours, and the feeding of the 5000 had been completed.

John chapter 6 records:  'After the people saw the sign Jesus performed, they began to say, “Surely this is the Prophet who is to come into the world.” Jesus, knowing that they intended to come and make him king by force, withdrew again to a mountain by himself. '

Jesus discerned the thoughts of the people; Here was their opportunity, all they could see was daily food without work and this appealed to their selfish nature.

At the instruction of Jesus, his disciples entered their ship and determined to go to the other side of the sea, as Jesus sent the people away, He ascended higher up on the mountain to pray and be alone with His Father God.

Matthew chapter 14 states: "But their ship was now in the midst of the sea, tossed with waves: for the wind was contrary."   Rowing very hard, they were only able to go about 3 or 4 miles and the disciples were not able to control their ship because of the storm.  Their greatest fear was that they might perish.

Mark 6 tells us it was sometime between 3:00 and 6:00 in the early morning Jesus was alone standing on the land watching.  He could see the disciples rowing frantically as the winds and waves tossed their boat and - - Immediately Jesus went to them walking on the water.   (Wow - - That must have been an amazing sight, and scary too.)

And when the disciples saw him walking on the sea, they were troubled, saying, It is a ghost; and they cried out in fear.  But right away, Jesus spoke to them, saying, "Be of good cheer; it is I; do not be afraid."

Can you really blame the disciples for being afraid?  How would you have reacted if you had been there?  I think I know the answer and so do you.

Peter hoping that maybe this was really Jesus and not a spirit, answered Jesus by saying, "If it is really you, then ask me to come to you on the water." And Jesus said, "Come."  Taking a bold step of faith, Peter stepped out and began to walk on the water toward Jesus, but suddenly fear took over and he looked down at the troubled sea and began to sink.  His next move was a good one, because Peter cried out "Lord Save me."

Immediately Jesus reached out and caught the sinking man, and lifted him up, saying to him;  "Oh you of little Faith, why did you doubt?"

As the two of them entered the boat the wind and waves ceased and all who were in the ship fell at Jesus feet and worshiped him saying: "Truly you are the Son of God."

The disciples took some deep consideration to confess that Jesus was the Messiah, but never the less, Jesus accepted their worship, and if he were merely mortal and not God, it would have been wrong to allow them to deify him.

Today each of us need to understand that Jesus is waiting to hear what we have decided about him.  Are you ready to say; "Jesus you are the Son of God, and I will worship you?"

Email ThisBlogThis!Share to TwitterShare to FacebookShare to Pinterest
Labels: Who is Jesus? Chapter 27 "Jesus Walks on the Water"

I loved reading the story. Reminded me of a song I learned as a child:
Tell me the stories of Jesus I love to hear;
Things I would ask Him to tell me if He were here;
Scenes by the wayside, tales of the sea,
Stories of Jesus, tell them to me.