Who is Jesus? Chapter 32 A Woman Anoints the Feet of Jesus 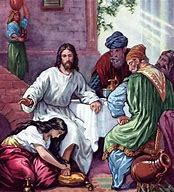 Jesus had been traveling and teaching for many hours and the day was nearing evening.  One of the Pharisees asked Jesus to come to his home and eat with him, and so he went into the Pharisee’s house and reclined at a table.

And behold, a woman of the city, who was a sinner, when she learned that Jesus was having a meal in the Pharisee’s house, brought an alabaster flask of sweet smelling ointment,  and standing behind him at his feet, weeping, she began to wet his feet with her tears and wiped them with the hair of her head and kissed his feet, anointing them with the ointment.

Now when the Pharisee who had invited him saw this, he said to himself, “If this man were a prophet, he would have known what sort of woman this is touching him, for she is a sinner.”

And Jesus knowing The Pharisee's thoughts said to him, “Simon, I have something to say to you.” And he answered, “Go ahead and say it, Teacher.”

You will remember that Jesus often told stories and there was a reason behind all this.  He wanted to make a point to illustrate a bigger picture to all who were in the house so He began by saying;

“A certain moneylender had two debtors. One owed several thousand dollars, and the other one a few hundred dollars. When they could not pay, he cancelled both their debts. Now which of them will love him more?”

Simon answered, “The one, I suppose, for whom he cancelled the larger debt.” And Jesus said to him, “You have judged rightly.”

Then turning toward the woman he said to Simon, “Do you see this woman? I entered your house; you gave me no water for my feet, but she has wet my feet with her tears and wiped them with her hair.

You gave me no kiss, but from the time I came in she has not ceased to kiss my feet.
You did not anoint my head with oil, but she has anointed my feet with ointment.  Therefore I tell you, her sins, which are many, are forgiven—for she loved much. But he who is forgiven little, loves little.”

The woman; a sinner had some to worship Jesus and show her love for him, and he repaid her by forgiving her sins, and telling her to go in peace.  Jesus knew she was a sinner, because Jesus knows all about each and every one of us.  He understands we are frail, but He wants to make us strong.  He is ready to forgive the sins of the worse sinner and also the sins of those who think they are good enough already and don't need to be forgiven.

The woman did not care what others thought about her, she came to Jesus and received forgiveness and she left a righteous person.

Jesus is reaching out today to forgive your sins, large or small, regardless - - Jesus loves and cares for you and will always be with you no matter what.  Kneel at his feet and he will accept you into His kingdom.

Email ThisBlogThis!Share to TwitterShare to FacebookShare to Pinterest
Labels: Who is Jesus? Chapter 32 A Sinful Woman is Forgiven

Thank you for this post! Let us come close to Him He cares for us and His love is so amazing.

This is lovely. keep it up.