Who is Jesus? Chapter 33 Who is my Neighbor? 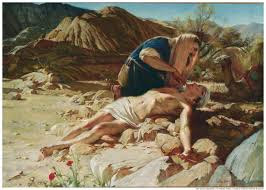 Who is Jesus? Chapter 33  Who is my Neighbor?

The happenings in today's message are taken from the Gospel of Luke chapter 10.
Jesus had appointed 72 of His followers to go two by two and preach about him being the Messiah, to heal the sick and cast out demons.  The 72 returned rejoicing saying; “Lord, even the demons are subject to us in your name!”  And Jesus said to them, “Yes, I have given you authority over all the power of the enemy, and nothing shall hurt you.  However, do not rejoice in this, that the spirits are subject to you, but rejoice that your names are written in heaven.”

But the lawyer, wanting to justify himself, said to Jesus, “Tell me, who is my neighbor?”

Jesus replied with a story as he often did to explain; “A man was going down from to , and some robbers surrounded him, stripped off his clothes, beat him and left him half dead lying in the road.  Now as it so happened a priest was going down that road, and when he saw the injured man he gingerly pulled up his robe so as to not soil it, and crossed to the other side of the road.  Soon a Levite approached but when he saw the wounded man, he also passed by on the other side.

But a Samaritan, as he journeyed, came to where the man was, and when he saw him, he had compassion.  He went to him and bound up his wounds, pouring on oil and wine. Then he carefully placed him on his own animal and brought him to an inn and took care of him.  And the next day he took out money which was about two days wages and gave them to the innkeeper, saying, ‘Take care of him, and if you spend more, I will repay you when I come back.’

Which of these three, do you think, proved to be a neighbor to the man who fell among the robbers?”

He said, “The one who showed him mercy.” And Jesus said to him, “You go, and do likewise.”

Now as Jesus continued on his journey teaching and ministering, he entered the .  And a woman named Martha welcomed him into her house.  And she had a sister called Mary, who sat at the Lord’s feet and listened to his teaching.  But Martha was distracted with much serving her guests. And she went up to Jesus and said, “Lord, do you not care that my sister has left me to serve alone?  Please tell her  to help me.” But the Lord answered her, “Martha, Martha, you are anxious and troubled about many things, but one thing is necessary.  Mary has chosen the good portion, which will not be taken away from her.”

So in today's broadcast we have considered that as believers we can go forward in Jesus name and especially rejoice that our names are written in heaven.  We must also consider that our neighbor is the person who needs our help.   And may we always be reminded that no matter how busy we are doing those things that seem important to us, we must also take time to sit at Jesus feet and learn more about Him and all He desires for us to do for Him.

Email ThisBlogThis!Share to TwitterShare to FacebookShare to Pinterest
Labels: Who is Jesus? Chapter 33 Who is my Neighbor?

It always seems to be the person in need of our prayers or mercy are the ones we find the hardest to give it to. Thanks for the reminder of the heart of our Savior who loves all equally. So moved by His grace for me and all. Thanks, sister.

Early morning is my special time to sit at Jesus' feet. Thank you for sharing God's Word.