Who is Jesus? Chapter 34 Jesus delivers a woman's daughter and spits on a deaf man 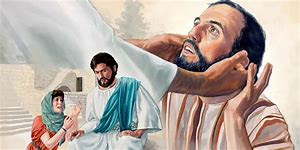 Who is Jesus?  Chapter 34  Jesus delivers a woman's daughter and spits on a deaf man

The happenings in today's message are from Mark's gospel chapter 7

The Jewish religious leaders were always disapproving of Jesus and condemning him, especially because Jesus healed people on the Sabbath day.  Also from what he was teaching; Jesus was putting himself equal with His father God and they were furious.  So one day they criticized the disciples eating bread without going through the traditional way to wash your hands.  Jesus rebuked them by saying: "Isaiah did prophesy well about you hypocrites, as it is written;  'This people honors me with their lips, but their heart is far from me; in vain do they worship me, teaching as doctrines the commandments of men.'  "You leave the commandment of God and hold to the tradition of men."

Jesus said to them, "You have a fine way of rejecting the commandment of God in order to establish your tradition!  God's word says to honor your father and your mother, but you use the money that should go for your parents support, for other things and say it is for God's work.  Jesus went on to speak of defilement as to what is in your heart; "What comes out of a person's heart is what defiles him. For from within, out of the heart of man, come evil thoughts, sexual immorality, theft, murder, adultery, coveting, wickedness, deceit, sensuality, envy, slander, pride, foolishness. All these evil things come from within, and they defile a person."  Jesus turned his back and moved on . . .

And from there he arose and went away to the region of Tyre and Sidon.  And he entered a house and did not want anyone to know where he was, never the less, he could not be hidden as word spread.  But immediately a woman whose little daughter had an unclean spirit heard of him and came and fell down at his feet.  Now the woman was a Greek, a Syrophenician by her nation; And she begged Jesus to cast the demon out of her daughter. The disciples asked Jesus to send her away because she is bothering us and besides, she is a Gentile, she is not worthy of help.

But Jesus answered and said to her, "I am sent to the lost sheep of the house of Israel."  Then she came and worshiped him, saying, "Lord, help me."  Jesus continued saying: "Let the children be fed first, for it is not right to take the children's bread and throw it to the dogs." But she answered him, "Yes, Lord; yet even the dogs under the table eat the children's crumbs." And he said to her, "For this wise statement you may go your way; the demon has left your daughter." And she went home and found her daughter calmly resting in bed and the demon was gone.

Then he returned from the region of and went through to the Sea of Galilee, in the region of the .  And they brought to Jesus a man who was deaf and had a speech impediment, and his friends begged Jesus to lay his hands on him.

And Jesus took the man aside away from the crowd privately, he put his fingers into his ears, and after spitting touched the man's tongue. And looking up to heaven, he sighed and said to him, "Ephphatha," that is, "Be opened." And his ears were opened, his tongue was released, and he spoke plainly. And Jesus charged them to tell no one. But the more he charged them, the more earnestly they proclaimed his fame. And the people were astonished beyond measure, saying, "Jesus has done all things well.  He even makes the deaf to be able to hear and the mute to speak."

Today we see that God desires our heart to be changed if we are harboring sin or ill will towards others.  We also viewed that Jesus had mercy on a Gentile woman who was not a Jew and delivered her oppressed daughter.  Amazing enough was the fact that blindness, deafness and not being able to speak was viewed as a curse and it was a custom for people to spit on them in disgust.  Jesus used his spit to bless the man by touching his tongue and healing his speech and also cured his deafness.

Wow; Jesus is the Awesome teacher, mighty deliverer, and healer of spirit, soul and body.

Email ThisBlogThis!Share to TwitterShare to FacebookShare to Pinterest
Labels: Who is Jesus? Chapter 34 Jesus delivers a woman's daughter and spits on a deaf man

I am so thankful for the many times God has healed me and encouraged me.

That's an excellent point about using His spit. As usual God's ways are higher than our ways and He always shows us the way to live in humility. Great lesson!