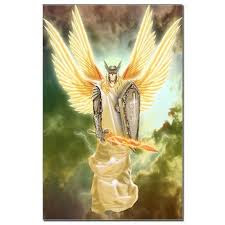 Our Sunday Morning Bible Study at Open Door Church began as our teacher displayed miniature replicas of the Ark of the Covenant with the two cherubim on the mercy seat.  From my notes I present an edited message as we studied about angels and cherubim.


The first mention of cherubim was in the garden when Adam and Eve were forced to leave because of their sin of disobedience.  A flaming cherubim guarded the gate of the garden blocking the entrance.


It is incredible the different types of angels.  They have the power of choice as we are reminded that some chose to follow Lucifer.  Their responsibilities are varied.  They are beautiful, powerful and are representatives of our God.


Michael seems to be a chief angel, and Gabriel a messenger angel.  Angels guard, protect, minister and there is a death angel.


There are layers of angels in the spiritual dimension.  An angel appearing to a person might look like a human, and dress, hair and complexion similar to those they know.  Not always does an angel appear with wings, but there are times when they do.


Exodus 25:17-22 were instructions about the ark and the Mercy Seat.  It was to be covered with pure gold and inspired craftsmen were to create a border and replica of two cherubim kneeling and facing each other with wings out stretched.  This was a sign of protection over the ark where God’s glory covered it.


Our teacher noted that from her studies, she believes God actually assigned two real cherubim to guard the ark.


The enemy desires to destroy everything holy.


The tent tabernacle is a pattern of heaven.  The veil with its colors of blue, purple and scarlet had cherubim’s woven into it.  The anointing oil with its pure incense of sweet spices was offered as the people were blessed by the High Priest.


As we are praying and thinking about the majesty of God, let us consider the worship involved; people, animals, priests sacrificing the animals, incense and prayer.


Isaiah 66:1-2  66 Thus says the Lord, The heaven is my throne, and the earth is my footstool: where is the house that ye build unto me? Where is the place of my rest?  For all those things hath mine hand made, and all those things have been, says the Lord: but to this man will I look, even to him that is poor and of a contrite spirit, and trembles at my word.  (God is looking at us as we are to be His temple.)
Psalms 148:1-6 says, Praise the Lord, Praise the Lord all His angels.
We must check ourselves when we fear and become anxious.  The information we have is usually the small picture.  The big picture is in God’s hands.
In Christ Jesus dwells all the fullness of the divine.  Jesus made peace through his death on the cross for us.
Ezekiel 28:14-19 tells of the fall of the anointed cherub.  Because of his beauty and pride making himself equal with God, he persuaded a large group of angels to follow him.  Unfortunately this was because they had the power of choice.
As Christians may we be careful of our attitudes and realize God is supreme.  As we minister it is all Him and all honor and praise is directed toward Jesus.
Posted by a joyful noise at 12:03 AM

Email ThisBlogThis!Share to TwitterShare to FacebookShare to Pinterest
Labels: Angels and Cherubim

Free will. All of His creation fails struggles with what He provides. Never stopping to realize that He is the example of love, giving, and sacrifice… and yet we take…

Thanks for the reminder of who we are and what are responsibilities are. Along with the help from Above and who He assigns!