What can we learn from the life of Elijah?


For our Wednesday Prayer meeting, I prepared a lesson to consider what we can learn from The Prophet Elijah.  At times he was bold and at other times fearful and uncertain, we have much to gain by observing him.  God uses imperfect people and He can use YOU.


From the histories revealed in the Bible we find principles that demonstrate the victory in the life of a believer as well as defeat and recovery.

We first meet Elijah in 1 Kings chapter 17, as he makes a declaration to the Evil King Ahab.  “Because of your wicked ways, God is sending a famine and no rain on the land.  Immediately there was a draught in the land, and Ahab sought to kill Elijah because he blamed the prophet and did not take responsibility for his own sins.


God warned and protected Elijah, hiding him by a brook for many days where he was fed by ravens bringing him bread and meat every morning and night.


After a time, the brook dried up, but God told him to go to a certain place and he would find a widow woman.  Elijah spoke to the widow boldly and declared for her to make him a biscuit. She replied she only had enough meal and oil for one cake for her and her son and then they would die.


You might think Elijah had no pity, because he told her to make him a biscuit first.  When the woman obeyed what Elijah asked of her, a miracle happened and the barrel of meal and the jar of oil did not run out and the three of them were able to eat for many months.


Know that God is in control even when things look bleak.  Keep your eyes on Jesus and hold fast to God’s Word.


We next see Elijah as the central character in a face-off with the prophets of the false god Baal on (1 Kings 18:17-40.) 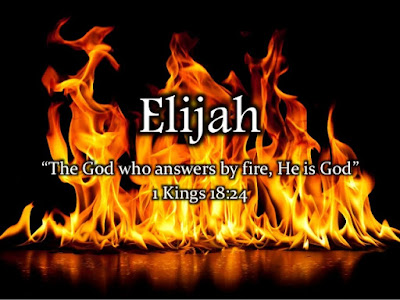 Elijah boldly tells the false prophets to build an altar, slay a sacrifice and the God who answers by fire is the True God.”  The prophets of Baal do  this, and call upon their god Baal, dancing and shouting all day long but nothing happens.  Elijah makes fun of them, saying perhaps your god is asleep or on a journey !!  Finally they give up.
Then Elijah builds an altar of stones, digs a ditch around it, puts the sacrifice on the top of wood and calls for water to be poured over his sacrifice three times to fill the trench.


Elijah calls upon Jehovah God, and immediately God sends fire down from heaven, burns the sacrifice, the wood, and licks up the water in the ditch. God proved He was more powerful than any false god.
It was then that God instructed Elijah and his followers to kill all of the false prophets of Baal.


Elijah is an illustration that it is not the vessel but God IN the vessel that demonstrates power.


After the great victory over the false prophets, Elijah prays and God sends rain once again to fall on the land (1 Kings 18:41-46). However, Elijah hears that Ahab’s wife Jezebel has made a vow to kill him; now Elijah feels sorry for him-self, hides in a cave, is depressed, and even comes to believe that he was the only one left of the prophets of God.
He took his eyes off God and looked at the situation.


When Elijah stopped focusing on the fear of what men could do and his feelings of being the only one left, He heard God’s voice, and soon after, Elijah went on to be taken up to heaven in a whirlwind.  (2 Kings 2:1-22)


Just as Elijah did, when the believer focuses on the noise and the tumult of life in this world, we may get our eyes off of Jesus.  However, if we listen for His still, small voice and walk in obedience to His Word, we find victory and reward. Elijah was filled with human frailties yet he was used mightily of God.
You too can be used by God as you allow the Holy Spirit to guide and direct you.


God has not changed and today we have access to the same power by the Holy Spirit for God to work through us. (2 Corinthians 4:7).


As Elijah did, you can prophesy, make decrees, and expect answers as you pray over your city, over your family and loved ones.

Email ThisBlogThis!Share to TwitterShare to FacebookShare to Pinterest
Labels: What can we learn from the life of Elijah?

I love how the Bible shows that even the heroes in the story are still human; facing fear and loneliness and disappointments. But God is always there ready to bring them out of their situation and deliver. Even us modern people can relate to that.

Elijah is indeed an inspiring man, as human as each of us, and yet used powerfully by the Lord. Great illustrations, and I think I love this quote best "Elijah is an illustration that it is not the vessel but God IN the vessel that demonstrates power." Have a blessed day!

I have loved Elijah, and when I'm in Heaven I sure want to see and meet him! It's always a great info piece re: him and how he's around and about for many people. Anyhow, thank you much for sharing this info!!! Bless you!!!