Our visit to the Sozo session was completed by 3:00 pm and the Friday evening service was not scheduled to begin until 7:00.
My daughter and I decided to get something to eat and then visit the house of prayer on the church campus. 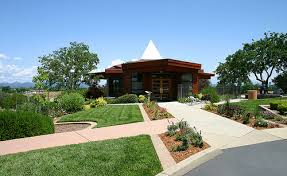 Standing alone on a beautiful knoll was the Modern looking house of prayer.  Inside we viewed many young adults kneeling or laying on the carpeted floor.  Some appeared to be sleeping rolled in a sleeping bag.  The atmosphere was peaceful, but we did not stay.
FYI
The house of prayer is a centralized prayer room where worship and prayer are offered to God day and night in our city  ().  Our prayer and worship sets consist in some devotional worship times, corporate intercession times, and corporate times of  meditation on the Word of God. Our prayer sets are all characterized by antiphonal singing, in which prayer and singing are intermingled with the Word of God in prophetic interaction. The prayer room is open for anyone to participate during corporate prayer times. All sets are lead by The Watch staff or by worshippers from various churches in the area.
The hour was now 5:00 pm and Judie wanted me to see the church campus on the other side of the parking lot. 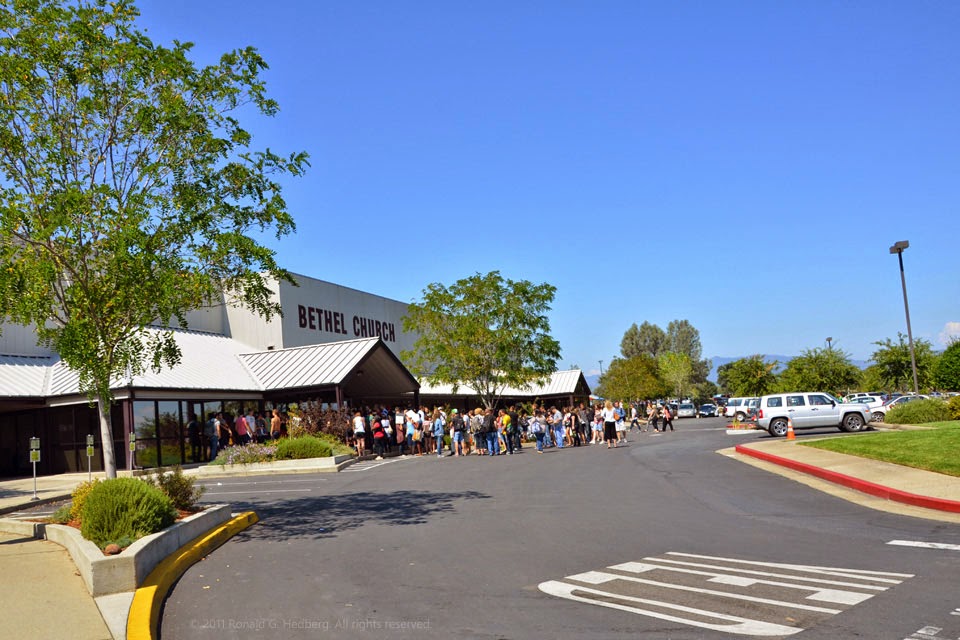 As we walked closer to the church we could see many people congregated outside and at a snack area where you could purchase coffee, sandwiches and snacks.
Through a door we entered where the evening service was to be held in two hours.
Already almost every seat in the auditorium was taken or saved.  A band was playing music as they practiced for the service.
It was already a Full House.
“Perhaps we should find a seat and relax,” my daughter suggested.  Two seats together on the back row called our names and we claimed them.
As the time for the service neared, there was standing room only, and an announcement was made about an overflow room with direct TV.
The service began on time with lively music and worship choruses, drawing the people into the presence of the Lord.
Around 8:30 pm missionary Heidi Baker came to the pulpit and ministered for about an hour.  She then dismissed those who had to leave and about 100 people departed leaving around 1000 still in their seats.  Rev Baker called those forward who desired to receive the Baptism of the Holy Spirit and many went to the front.
She knew there was not enough room at the alter for all to come, so she urged the congregation to seek the Lord in their seats, or kneel if they were able.
The tangible presence of the Lord was touching many as they worshiped Jesus.
Around 11:00 pm my daughter and I moved closer to the front, but many young people were lying on the floor and there was no room for us to enter.
We decided to go to our hotel as we intended to return by 8:00 am in the morning to the Healing Rooms.
Our visit continues to the :   Saturday Morning Healing Rooms – CLICK HERE

I remember when I went to watch Hillsong's concert. The place was packed with worshipers, it was crazy!

Looking forward to hear your story the next morning.

I've been to Bethel a few times myself!

I'm happy for you. Many blessings through many who are turning to the Lord. A blessed day for all of us through it. Thanks for sharing.