Who is Jesus? Chapter 36; Jesus Predicts His Death and Resurrection 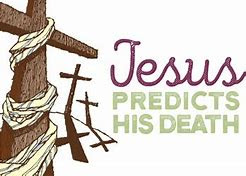 Who is Jesus? Chapter 36; Jesus Predicts His Death and Resurrection

Early in the ministry of Jesus, certain Greeks desired Philip to bring them to see Jesus.  Before them all Jesus began to pray:  My soul is troubled; Father, save me from this hour: but for this reason I came and am facing this hour.  Father, glorify thy name. Then there came a voice from heaven, saying, I have both glorified it, and will glorify it again.  The people that stood by heard the voice but said it must be thunder.  Jesus answered and said, This voice came not because of me, but for your sake.
And I, if I be lifted up from the earth, will draw all men unto me.  This he said, signifying what death he should die.
Jesus tried to prepare his disciples about his death; that He must suffer many things, and be rejected of the elders, and of the chief priests, and scribes, and be killed, and after three days rise again.

But the disciples refused to listen because they did not like this kind of message.  Peter openly rebuked Jesus saying "Not so Lord, please do not talk this way, because you are scaring us."

Jesus told Peter that he was listening to the wrong voice and it was time for them all to begin to understand the Big picture of God's eternal plan of salvation.

Jesus even mentioned the cross as he shared: from Marks's Gospel chapter 8; Whosoever will come after me, let him deny himself, and take up his cross, and follow me.  For what shall it profit a man, if he shall gain the whole world, and lose his own soul?  Or what shall a man give in exchange for his soul?

A few days later as they passed through Galilee; Jesus the second time, again taught his disciples about his death, and said to them, The Son of man is soon to be delivered into the hands of men, and they shall kill him; and after that he is killed, he shall rise the third day.  But they did not understand his saying, and were afraid to ask him.

You would think the followers of Jesus might get a clue after being told twice that he was about to be betrayed, killed and rise again, but no they were dense and a third time Jesus attempted to help them to understand as they went up to Jerusalem.

Matthew's gospel chapter 20 says it this way: And Jesus took the twelve disciples aside, and said unto them,  Behold, we go up to Jerusalem; and the Son of man shall be betrayed unto the chief priests and unto the scribes, and they shall condemn him to death, And shall deliver him to the Gentiles to mock, and to scourge, and to crucify him: and the third day he shall rise again.

Another time Jesus again tried to prepare his disciples that he was going to leave them.  Johns Gospel chapter 14 Jesus shared:  In my Father's house are many mansions: if it were not so, I would have told you. I go to prepare a place for you.   And if I go and prepare a place for you, I will come again, and receive you unto myself; that where I am, there ye may be also.   Again, they did not understand that Jesus was saying He was the way to heaven if they would believe in him.

Jesus continued saying; These things have I spoken unto you, while I am still here with you.  But I will not leaved you comfortless,  For the Comforter, which is the Holy Ghost, whom the Father will send in my name, he shall teach you all things, and bring all things to your remembrance, what ever I have said unto you.

It is good for us all to think on these things.  It is good to rejoice that the story has a happy ending, but not a final conclusion.

Email ThisBlogThis!Share to TwitterShare to FacebookShare to Pinterest
Labels: Who is Jesus? Chapter 36; Jesus Predicts His Death and Resurrection

There's no better friend that Jesus. I am thankful that He sent the Comforter.