The Following notes were taken at the as the Bible Study lessons on “POWER” continued.


In the Jewish culture, Pentecost is a feast where they partied and had a good time in their worship; remembering their deliverance from .


On mount Sinai, Moses spent 40 days in God’s presence as God gave him the law.


is the highest point in ancient , and may be the mountain where Satan promised Jesus the kingdoms of the world if Jesus would bow down and worship him.


This mount Zion is probably where Jesus gathered the 500 followers and told them to return to and wait for the Holy Spirit to be poured out.


Both mountains held significant events; Sinai for a newly redeemed birth of , recognizing a new covenant; and the birth of Christianity, with a brand new covenant.


Both events involved fire, and are in the same time line – month and day.  The children of left at Pass-Over and traveled for 40 days.


Moses went up on the mountain for 40 days and returned with the Torah.


Both events had similar sounds and symbols.  There was wind, smoke, fire and voices from Heaven.


At Sinai, the people were kept away from the fire, but in Acts the fire came down on the people.


Both happenings God was present.  In both cases, God sealed a covenant, giving the Law at Sinai, and at Pentecost, the Law was written on their hearts.


In both cases a multitude of people were present.


This happened 1200 years apart as spoken by the Old Testament Prophets. 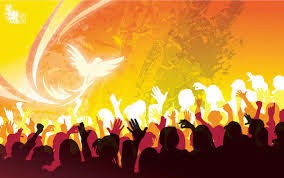 At Pentecost, the people in the street could hear the noise and see the fire, and wondered what does all this mean?  The Believers were acting strangely and the crowd thought they must be drunk.
Peter spoke to the crowd on the day of Pentecost, saying,

“Fellow Jews and all of you who live in , let me explain this to you; listen carefully to what I say. 15 These people are not drunk, as you suppose. It’s only nine in the morning! 16 No, this is what was spoken by the prophet Joel: 17 “In the last days, God says, I will pour out my Spirit on all people. Your sons and daughters will prophesy, your young men will see visions, your old men will dream dreams. 18 Even on my servants, both men and women, I will pour out my Spirit in those days, and they will prophesy. 19 I will show wonders in the heavens above, and signs on the earth below, blood and fire and billows of smoke. 20 The sun will be turned to darkness
and the moon to blood before the coming of the great and glorious day of the Lord.
21 And everyone who calls on the name of the Lord will be saved.’

This is insightful! Never sat down once to study the difference.
Thank you for sharing Hazel

Doesn't that word "anyone" just thrill your heart? God doesn't play favorites....all we have to do is call. Loved reading about Sinai and Pentecost. I would have enjoyed hearing the sermon.