I Have a Dream – (said Martin Luther King) by Hazel Moon 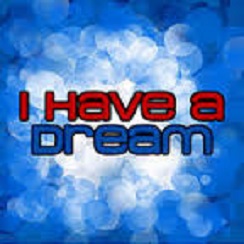 Reverend King’s dream was not the kind you have at night while you sleep, but his dream was a strong DESIRE for change and a YEARNING to make things better.


What kind of dreams do you have?  Do they include a longing and a craving for more of God?


Jesus told 500 people to wait for the Holy Spirit and to pray until God showed up.


Perhaps all 500 were there at first, but 380 people got tired, and gave up and went home until only 120 were left in the upper room.  The hundred and twenty held on to the dream and kept praying and waiting until the fire fell with a great noise from heaven and they began to speak in other tongues.  (Acts 2)


Joseph was just a boy the youngest son, and the favorite of his father Jacob, and he was a dreamer.
There are times to share what God shows you but other times it might be best to keep still and wait for the performance of what you have seen.  However Joseph was so excited that he loudly and purposely shared his dream with his older brothers.


Were his brothers happy because he was having dreams?   NOT on your life.  In fact they were jealous and hateful and determined to get rid of this thorn in their flesh.


If you know the story, they tricked Joseph and put him into a pit, but when a caravan of merchants came by headed for , they sold Joseph to the group.
In , Joseph got a good job with a rich man, but his beautiful wife, tried to beguile Joseph.  When Joseph refused her charms, she falsely accused him to her husband who promptly cast Joseph into prison for several years.  However during that time he interpreted two dreams for the king’s servants.  One dream did not turn out so good, but the other servant was restored to the king’s palace.  Joseph told the servant to remember him to the King so he could be released.   Time went by until the King had a DREAM, and none of his wise men could tell him the meaning.  The servant remembered Joseph and told the King, I know a man who can tell you the meaning, and Joseph was called up out of prison.


Don’t you think it strange, how Joseph was in the dark dungy prison and suddenly he was placed into the glorious palace of the king??


That is what God does for us when we receive Jesus into our heart.  He lifts us up out of the miry pit and places us into His wonderful kingdom.


Then it came to pass, at the end of two full years, that Pharaoh had a dream; and behold, he stood by the river. Suddenly there came up out of the river seven cows, fine looking and fat; and they fed in the meadow. Then behold, seven other cows came up after them out of the river, ugly and gaunt, and stood by the other cows on the bank of the river. And the ugly and gaunt cows ate up the seven fine looking and fat cows. So Pharaoh awoke. He slept and dreamed a second time; and suddenly seven heads of grain came up on one stalk, plump and good. Then behold, seven thin heads, blighted by the east wind, sprang up after them. And the seven thin heads devoured the seven plump and full heads. So Pharaoh awoke, and indeed, it was a dream.


God anointed Joseph to give the interpretation which pleased the King so much that he put Joseph in charge to collect wheat and grain for the next 7 years preparing for the 7 lean years.


Do YOU have a dream?  Can you imagine that the people in our city also have dreams and desire what they really don’t know what it is they need.  Someone must tell them that the answer to fulfilling any dream is to receive Jesus into their life.
Posted by a joyful noise at 1:28 AM

Email ThisBlogThis!Share to TwitterShare to FacebookShare to Pinterest
Labels: I Have a Dream – (said Martin Luther King)