Types of Angels for every Need 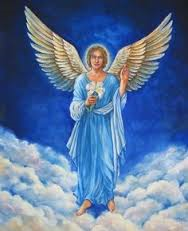 Following up at our Bible Study at Open Door Church, our teacher for today, Donald brought a study on Angels and their many types.
Last week we studied about the cherubim, two of them on the mercy seat over the ark; Cherubim were to guard and protect the ark.
Guardian Angels:  The most referenced type of angel is the Guardian Angel. Perhaps you were told as a child that a Guardian Angel watched over you, or as an adult you might have—in a moment of desperation—asked God to send your Guardian Angel to deliver you. The good news is; Guardian Angels are very real, and you have more than one.
Angels are for our protection and often for our assistance.
Ministering angels prepared a meal for Elijah, and ministered to Jesus when He was tempted.
Seraphim perform priestly duties;  Isaiah 6:1-7  Above him stood the seraphim. Each had six wings: with two he covered his face, and with two he covered his feet, and with two he flew.
Living creatures are mentioned in Revelation as they worshiped God  Rev 6:1 and I heard one of the four living creatures say with a voice like thunder, "Come!"
Living creatures Fell on their faces  Rev 7:11  The four living creatures, and they fell on their faces before the throne and worshiped God - -
Angels may give guidance: The angel of the Lord goes before and makes clear paths.
Angels hold back the enemy, and shut the lion’s mouths.
Angels may bring a message as Gabriel did to Mary.
A host of angels announced the birth of Jesus to shepherds while feeding their sheep.
Michael is a Warring Angel.
Angels have a role in fulfilling prophesy.
There are avenging angels sent to avenge wicked deeds.
There is a death angel:  Sent to slay the first born of the Egyptians.  Also an angel of death who comes for the Christian at their time of passing.
Angels can travel at inconceivable speeds and appear and disappear at will.
Hebrews 1:14  Are they not all ministering spirits, sent forth to minister for them who shall be heirs of salvation?
Posted by a joyful noise at 9:56 PM

Email ThisBlogThis!Share to TwitterShare to FacebookShare to Pinterest
Labels: Types of Angels for every Need

Hazel, I just read the reason you are giving up your blog for a while. so sorry to hear of your husband illness, it will be full time job taking care of him. Please know all of us who follow you will be praying and please try to give us updates when you are able. God's strength in your life my friend.