This post is an edited Sunday sermon from my notes as Pastor Rodney spoke. 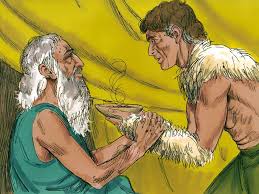 Genesis 27:1-4 When Isaac was old and his eyes were so weak that he could no longer see, he called for Esau his older son and said to him, “My son.” “Here I am,” he answered.  Isaac said, “I am now an old man and don’t know the day of my death.  Now then, get your quiver and bow—and go out to the open country to hunt some wild game for me.  Prepare me the kind of tasty food I like and bring it to me to eat, so that I may give you my blessing before I die.”   Now Rebekah was listening as Isaac spoke to his son Esau.


Jacob was Rebekah’s favorite and she helped Jacob trick his Father into giving Jacob the blessing.  When Esau returned and discovered that Jacob had received the blessing, he wept and asked his Father is there was only one blessing, and could he have a blessing also.  Isaac was very sad, and told Esau that he would indeed be blessed but he would serve Jacob.  Eventually Esau would break the yoke off his neck.


At times we see others blessed and question “Are there any blessings left for me?”


Esau was jealous, angry and hated his brother violently with threats of murder.  Their mother Rebekah, urged Jacob to leave and go to her brother’s home and God will provide him with a wife and bless you.  Jacob did as she asked, and although he had the promise of the blessings, it seemed that what goes around comes around.  He was deceived and cheated many times by his uncle.


Jacob continued to claim the promise even when things weren’t going so well.  He pressed in and the promise went before him.


Many years passed, and eventually Jacob and his family returned home and the broken fellowship with his brother was restored.   They wept on each other’s necks and declared God is good and His blessings abound.


Understand that you have the promise of blessings, so keep the promise ever before you knowing that God is good all the time.
Posted by a joyful noise at 10:42 PM

I love this: Keep the promise ever before you! I am having some trouble with short term memory, so I have decided to memorize scripture by printing out passages and putting them on the fridge or wall or mirror. Keeping God's promises always before me!! Thank you for your encouraging posts. Have a blessed day.

Sometimes, it is hard to cling to the promises of God, when things seem to go from bad to worse. But, He truly IS a good God, and He always keeps His Word. Mom always told me that God has His own timetable...He doesn't operate by our timing, and that is where faith and trust must take over. Thank you for this encouraging post.

Excellent reminder of free will and God's redemption. It is amazing that God continues to bless everyone alive due to His and His Son's sacrifice.

Amen. This is an incredible story and the lesson can be applied to our lives now. I love how timeless the lessons are in the Bible.