The Word Was God

This post is from my notes during our Bible Study Sunday Morning at church
Zebedee was the husband of Salome, and father of James and John the apostles.  He was an honorable fisherman in comfortable circumstances.  He was not above physical labor and the Bible mentions that he and his sons were on his boat mending their fishing nets.  His son John is the writer of the gospel of John we are studying today.  John was learned in the Old Testament scriptures and quotes from the Old Testament to prove that Jesus is the Christ.  Here he starts with the beginning and refers to Jesus as the “Word.”


Jesus was the Logos meaning God’s plan for the redemption of man kind.


The first verses in Chapter one, was a chant or song in the early church houses.


We get to know the Word who became flesh as we receive Him into our life and begin to follow Him as our Lord.  There is a longing in our heart for fulfillment and we find this in Jesus.


The tree of life was protected in the Garden and lest Adam and Eve partake of it in their sinful state, they were forced to leave the beautiful garden.


There is an amazing correlation between the two “In the Beginning” as the Holy spirit hovered over the waters.   God separated Light from Dark, he tore them apart and we can imagine the sounds that were made in the beginning.  I doubt if this was done quietly as He ripped apart the waters from the sky and created lakes, rivers and oceans.  There must have been a roar as things came together and were put in place.


God spoke these into existence and said: “Let there be light.  His words generated life and the power to reproduce.  Jesus being the Word, was there in the beginning.  All this was God’s plan set up in eternity.


Proverbs 8:27-- When he prepared the heavens, I was there: when he set a compass upon the face of the depth:  When he established the clouds above: when he strengthened the fountains of the deep: when he appointed the foundations of the earth: and I was daily his delight, rejoicing always before him - -


This is a beautiful picture of Jesus with God and all things created by Him.


When John the Baptist came preaching, the people were living in darkness.  He proclaimed there comes one after me that is the Lamb of God that takes away the sins of the world.  John had heard from God and preached what the Father’s heart was telling him.  “He whom you see the Spirit descend and remain, is the same one who baptizes with the Holy Spirit."


There is time to repent and come to the Light.  For us today, we have come to Christ the Light of the World and he desires that we no longer walk in darkness.


1 John 1:5-7 This is the message we have heard from him and proclaim to you, that God is light, and in him is no darkness at all. If we say we have fellowship with him while we walk in darkness, we lie and do not practice the truth. But if we walk in the light, as he is in the light, we have fellowship with one another, and the blood of Jesus his Son cleanses us from all sin. 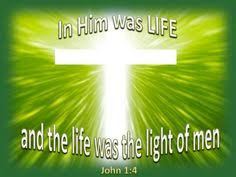 Email ThisBlogThis!Share to TwitterShare to FacebookShare to Pinterest
Labels: The Word Was God